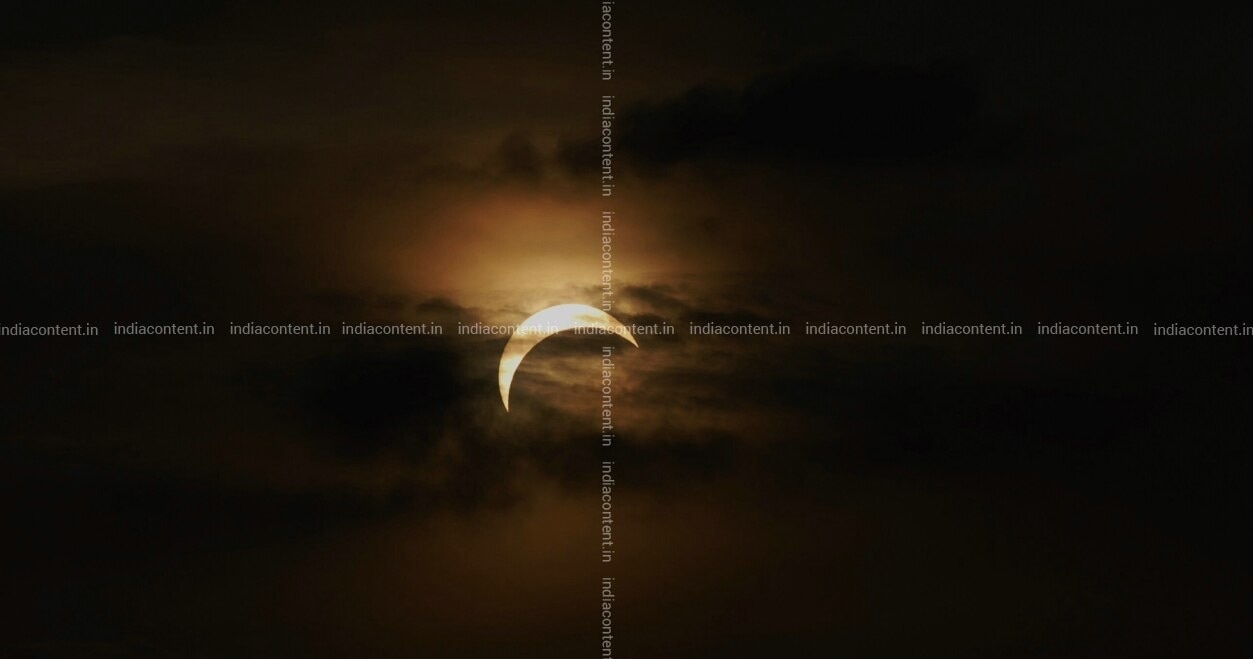 What is the Solar Eclipse?

There are four types of solar eclipses.

1. Partial Solar Eclipse takes place when the Moon partly covers the Sun’s disk and casts only its penumbra on Earth.

2. Annular Solar Eclipse occurs when the Moon’s disk is not big enough to cover the entire disk of the Sun, and the Sun’s outer edges remain visible, which forms a ring of fire in the sky. An annular eclipse of the Sun occurs when the Moon is near apogee ((the farthest point from Earth in its orbit), and the antumbra of the moon falls on Earth.

3. Total Solar Eclipse takes place when the moon entirely covers the Sun, and it can only occur when the moon is near perigee (the point of the Moon’s orbit closest to Earth). You can only see a total solar eclipse from where the Moon’s casts its darkest shadow— the umbra.

4. Hybrid Solar Eclipse, also called annular-total eclipse, occurs when the same eclipse changes from an annular to a total solar eclipse, and/or vice versa, along the path of the eclipse.

Besides, looking directly at the sun during an eclipse can lead to permanent eye damage or blindness. Therefore, indirect viewing techniques are used during a solar eclipse to protect the eyes. Though it is safe to view only the total phase of a total solar eclipse with naked eyes and without protection, this is a risky, as most people are not trained to spot the phases of an eclipse, which can last up to two hours while the total phase can only last a maximum of 7.5 minutes for any one location.

Solar eclipses offer a great opportunity for the scientists to study aspects of the sun like its corona, the layer of plasma surrounding the star. During a total solar eclipse, the moon blocks the sun’s extremely bright face, according to NASA, and offers a glimpse at the relatively faint corona.

Scientists can know more about how the weather works in space by studying the inner regions of the corona.

Besides, different religions have acknowledged solar eclipses as important events. The Chinese have interpreted eclipses as a giant dragon engulfing the Sun since 4000 years. The ancient Egyptians, Mesopotamians, Assyrians were also curious about solar eclipses and studied them ardently. Moreover, for Hindus, too, a solar eclipse is a significant event. Many people associate eclipses with bizarre myths and superstitions, as well.

Here on Earth, a total solar eclipse creates rare weather conditions. As the moon moves between Earth and the sun, the temperature on the ground drops drastically and the light becomes noticeably dimmer. Quick changes in those conditions can have impacts on weather, plants and animal behaviour.

There are many myths associated with the solar eclipse.

In many cultures, the legends surrounding solar eclipses involve mythical figures eating or stealing the Sun. Others interpreted the event as a sign of angry or fighting gods.

Hindus construe a solar eclipse as Rahu and Ketu (the northern and southern node of the Moon) devouring the Sun. it is believed that Rahu takes revenge of the time when Vishnu had cut off his head after Samudra Manthan, which created Ketu. Surya and Chandra were the ones who had informed Lord Vishnu about Rahu drinking the Amrit (nectar). That is why solar and lunar eclipses occur.

Many people observe fast also during solar eclipses and they avoid going out during an eclipse or eating food.

At many places, temples also remain closed during the time of a solar eclipse. It is believed that entering temples or offering prayers during an eclipse has harmful effects, as the eclipse is an unholy event.

According to many people, solar eclipse radiates negative energies and, therefore, pregnant women avoid giving birth on this day, as it may curse the new-born.

It is also believed that worshipping Gods at home or performing any puja at home is also ineffective during a solar eclipse. Many people even take a cold bath after the eclipse to wash off all negative energies.

The India Content website has a good stock of images related to the Solar Eclipse. The high-quality images on the website are available in three sizes – small, medium and large.