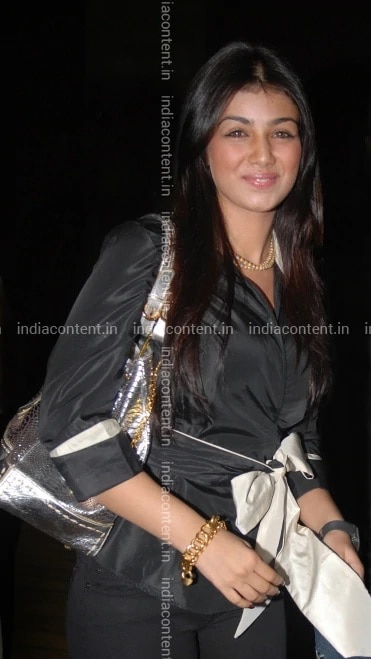 A ravishing Indian Film Actress, Model, Television Presenter, and Voice Artist, Ayesha Takia turned 34 on April 10. She is predominantly known for her work in Hindi and Telugu cinema.

Hailing from Gujarati, British and Maharashtrian ethnicity, Ayesha took birth in Mumbai, Maharashtra in 1986. She was born to a Hindu-Gujarati father named Nishit Takia and half Maharashtrian and half Caucasian British mother Faridah Takia. She has one sister named Natasha. She is the ex-student of St. Anthony’s School, Chembur, Mumbai.

Ayesha embarked on her modelling career at the age of 15. She received wide recognition after appearing in an ad campaign ‘I am a Complan Boy, I’m a Complan girl!’ alongside Shahid Kapoor. She also starred in Falguni Pathak’s music video ‘Meri Chunnar Udd Udd Jaye’ in 2000 and was noticed among the masses. It brought her huge popularity. During the era of remixes in India, she came into the spotlight with her portrayal in a remix song Nahin Nahin Abhi Nahin and was proposed for several Bollywood movies.

Initially, Ayesha signed her first movie named Socha Na Tha but because of the postponement in its production, Taarzan: The Wonder Car was released first. Ayesha appeared in several movies but they could not cause a stir in the public and critics. In 2006, her performance in the movie Dor was appreciated a lot. It was a small budget movie in which she enacted the character of a young widowed Rajasthani woman who lives in a traditional joint family. The movie made a splash on the silver screen.

Besides Bollywood, Ayesha was featured in the first 2005 Telugu movie ‘Super’ alongside Tollywood star Akkineni Nagarjuna. Lately, she made her appearance in Prabhu Deva’s Wanted alongside Salman Khan and this movie loomed as one of the biggest chartbusters of 2009. In 2011, she appeared in Mod which was a huge success in the box office. Some of her blockbuster movies are Shaadi No. 1, Salaam-E-Ishq, De Taali, Paathshala, and Sunday.

In 2012, she presented the one season of music-reality show Sur Kshetra.

Had she not been an actress, she would have been a travel show host because she enjoys travelling a lot and is a camera lover.

Ayesha made her appearance in an ad campaign for PETA India and announced herself as a vegan.

Ayesha Takia has dated the actors named Siddharth Koirala and Ashmit Patel for some time. She also had an affair with the entrepreneur Farhan Azmi and soon both of them exchanged the nuptial vows in 2016. The deuce is blessed with a baby boy named Mikail Azmi. Ayesha is an explicit personality who is known to have denounced her politician father-in-law Samajwadi Party MLA Abu Azmi’s opinion for punishing the rape victims.

Ayesha is a fitness freak and loves to do aerobics, yoga, and meditation. Her leisure activities include reading, listening to music, travelling, and dancing. Ghulam Ali and Abeeda Praveen are her most-cherished Pakistani artists. Her favourite movies are Hum Dil De Chuke Sanam, Lamhe and Dilwale Dulhaniya Le Jayenge. She enjoys eating Indian and Italian cuisine but Pizza, Pasta, wonton soups, Vada Paav, Salads, and Chinese Hakka Noodles are amongst her favourites. She is fond of Hip-hop, Techno, Trance, Soft-rock, Rock, Ghazal, Sufi, and Hindi film songs. Aamir Khan, Amitabh Bachchan, Shahrukh Khan and Johnny Depp top the list of her favourite actors and Priyanka Chopra, Rani Mukherjee, and Sridevi are her favourite actresses. She likes the director Sanjay Leela Bhansali a lot. Her car collection includes the BMW 7 series and Honda City.

She is an avid cat lover and had a cat named Morrison. She always urges her producers to abstain from the intimate scenes and appeals to put the clause in the agreement. Once, she rebuffed the role in a Hollywood movie ‘A Knight with the King’.

The India Content Website has a good stock of images related to Ayesha Takia. The high-definition images are available in three sizes – small, medium and large.