Salman Khan celebrated his 54th birthday on December 27 by hosting a grand party at Sohail Khan‘s residence. Bollywood’s Bhaijaan called a lot of his friends, family members and colleagues from the industry to celebrate the special day with fervour. The actor celebrates his birthday every year at his farmhouse in Panvel, but this year he decided to throw a party closer to his house as his sister Arpita Khan Sharma is expecting her second child and Salman wanted to be close to her on his special day.

Born on December 27, 1965 Salman Khan is the son of the famous writer Salim Khan, who wrote the screenplays, stories and scripts for many Bollywood films including super-hits like Sholay (1975), Deewar (1975), and Don (1978).

In a film career spanning over thirty years, Salman Khan has won numerous awards and accolades for his contribution to the Hindi cinema. He has also received two National Awards as a film producer and two Filmfare Awards for acting.

Salman Khan is also known for hosting the reality show Bigg Boss since 2010.

Salman Khan is one of the most popular and commercially successful actors of Indian cinema. He played his first lead role in the film Maine Pyar Kiya in 1989, which was a super hit.

Some of his best movies are-

‘Do U Wanna Partner…’ the title track of the film Partner

‘You’Re My Love…’ from the film Partner

From break ups to court hearings Salman Khan’s life has been full of controversies.

On 28 September 2002, the actor was arrested for rash and negligent driving. In the accident, one person died and three others were injured. Charges of culpable homicide were laid against him but later dropped. In July 2013, Khan was formally charged with culpable homicide in the case, to which he pleaded not guilty.

After their break-up in March 2002, Aishwarya Rai accused Salman Khan of harassing her. She claimed that Khan had not been able to come to terms with their break-up and was harrying her. Rai’s parents then lodged a complaint against Salman Khan.

The case involves the alleged killing of a deer in a forest near Jodhpur when Salman Khan and his co-stars – Saif Ali Khan, Sonali Bendre, Tabu and Neelam were there for the shooting of the film ‘Hum Sath-Sath Hain’ in 1998. Later, Khan was acquitted in the blackbuck and Chinkara poaching cases by the Rajasthan High Court in July 2016. But, in October 2016 the Rajasthan Government approached the Supreme Court to challenge Khan’s acquittal in two related cases. In January 2017, Khan was acquitted in the case linked to the killing of a blackbuck in Rajasthan.

Khan was released on bail on 7 April 2018, pending appeal.

In February 2006, Salman was sentenced to one year in prison for hunting endangered species Chinkara. The sentence was stayed by a higher court on appeal. In April 2006, he was awarded a 5-year jail term and remanded to Jodhpur jail until 13 April when he was granted bail.

In 2007, Salman spent a week in Jodhpur jail before the court granted him bail. Besides, a case under sections 3/25 and 3/27 of the Arms Act was filed against the actor for allegedly keeping and using firearms with an expired licence. Later, the actor pleaded “not guilty” to charges of violating the law by keeping unlicensed weapons and using them.

The India Content website has a huge stock of Salman Khan photos, including his latest pics from movie promotions, premiers, special screening, shoots, award shows and many other events. The high -quality pictures on the website are available in three sizes-small, medium and large. 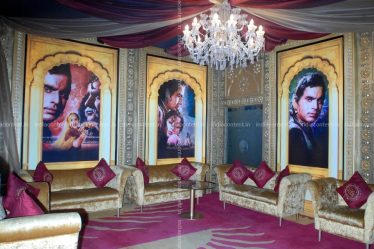