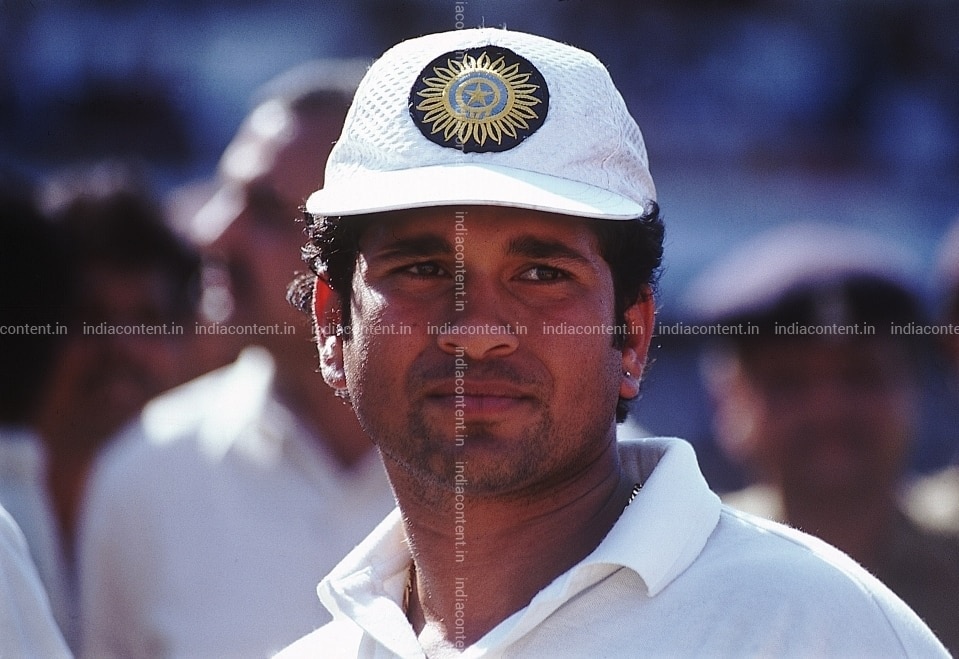 Tendulkar was born at Nirmal Nursing Home in Dadar, Mumbai on 24 April 1973 to Ramesh Tendulkar and Rajni Tendulkar. In his childhood, Tendulkar had a reputation of picking up fights and bullying. To curb such behaviour, his elder brother Ajit introduced him to Ramakant Achrekar, a famous cricket coach and club cricketer, who was impressed by his talent. Young Sachin picked up his first bat at the age of 11 years and by at 14 years of age, he used the bat to score 329 out of a world-record stand of 664 in a school match. At 15 years of age, he scored a century on his first-class debut for Mumbai and at 16-years-old, he became India’s youngest international Test cricket player, making his debut against Pakistan in Karachi in 1989. At the age of 18, he had scored two centuries in Australia, and in 1994, he scored 179 against the West Indies team. In August 1996, Tendulkar was made the captain of India’s cricket team at the age of 23. In 2012, he became a member of the Rajya Sabha, the upper chamber of Indian parliament, and was the first active athlete to join the Rajya Sabha. He was nominated for the post and his term ended in 2018. In 2012, he retired from ODI cricket, and in 2013, he retired from Indian Premier League after six years as a member of Mumbai Indians and retired from Test cricket ending his journey with records for the most career international runs and Test runs. Throughout his successful career, Tendulkar ranked among the game’s best batsmen. In 2014, he received the Bharat Ratna, India’s highest civilian honour and became the first sportsman to receive this honour. In 2019, he was inducted into the International Cricket Council Hall of Fame.

The period between 1994-1999 saw Sachin’s peak performance which coincided with his physical peak in his early twenties. In 1994, he opened the batting made 82 runs off 49 balls against New Zealand in Auckland. His first ODI century was against Australia in Colombo on 9th September 1994. In the 1996 World Cup, India lost the semi-finals but Tendulkar emerged as tournament’s top run-scorer with 523 runs. He scored 143 runs off 131 balls against Australia at Sharjah in 1998 which helped India proceed to the finals and win it. For his excellent performance in 1997-98 season, he received the Khel Ratna, the highest award given to an Indian athlete. In 1999 World Cup, he scored 140 runs against Kenya.

Though India was again defeated by Australia in the 2003 World Cup, Tendulkar, who averaged 60.2, was named the ‘Man of the Tournament’. In December 2005, Tendulkar scored a record-breaking 35th century in Test play against Sri Lanka. The century allowed him to surpass prolific Indian batsman, Sunil Gavaskar. In 2008, against Australia in Sydney, Tendulkar shaped India’s chase of 240 runs by scoring 117* runs off 120 balls. In 2009, Tendulkar scored 175 runs off 141 balls against Australia in Hyderabad.  In 2007, Tendulkar became the first player to record 15,000 runs in one-day international (ODI) play and in November 2011, he became the first batsman to score 15,000 runs in Test play. In December 2010, Tendulkar scored a “double century” against South Africa in a single inning of ODI play. In March 2012, in an ODI match against Bangladesh, Tendulkar scored his record-setting 100th international century.

In 1997, he won the title ‘Wisden Cricketer of the Year’ and in the years 1998 and 2010, he won the ‘Wisden Leading Cricketer in the World’ title. He also won the Player of the Tournament in 2003 Cricket World Cup. In 2010, he received Outstanding Achievement in Sport and Peoples Choice Award at the Asian Awards in London, the Sir Garfield Sobers Trophy for cricketer of the year, LG People’s Choice Award and was also made the Honorary group captain by the Indian Air Force. In 2012, he was made the Honorary Member of the Order of Australia by the Australian Government. In 2013, the Indian Postal Service released a stamp of Tendulkar, who became the second Indian after Mother Teresa to have a stamp released in their honour. In 2019, he was inducted into the ICC Cricket Hall of Fame and in 2020, he won the Laureus World Sports Award for Best Sporting Moment.

On 6th November 2014, Sachin Tendulkar launched his autobiography, Playing It My Way, and it was listed in 2016 Limca Book of Records for having the most number of adult hardback pre-publication orders, with, 1,50,289 copies confirmed.

Tendulkar’s father, Ramesh Tendulkar is a famous Marathi novelist and poet and his mother, Rajni, was a part of the insurance industry. He has three elder siblings – a half-sister, Savita, and two half-brothers, Nitin and Ajit. They were Ramesh’s children from his first wife who died due to childbirth.

Tendulkar married Anjali Mehta, a paediatrician, in 1995 and together they have a daughter, Sara, and a son, Arjun.

Every year, Tendulkar sponsors 200 underprivileged children through a Mumbai-based NGO, Apnalaya, which is associated with his mother-in-law, Annabel Mehta. Through Sachin’s crusade against Cancer, he raised ₹10.2 million for the Crusade against Cancer foundation through a request on twitter. He spent nine hours on Coca-Cola-NDTV Support My School Telethon in 2011 and helped raise ₹70 million for creation of basic facilities in 140 government schools across India.

The India Content website has a good stock of Sachin Tendulkar images. The high-definition images on the website are available in three sizes – small, medium and large.