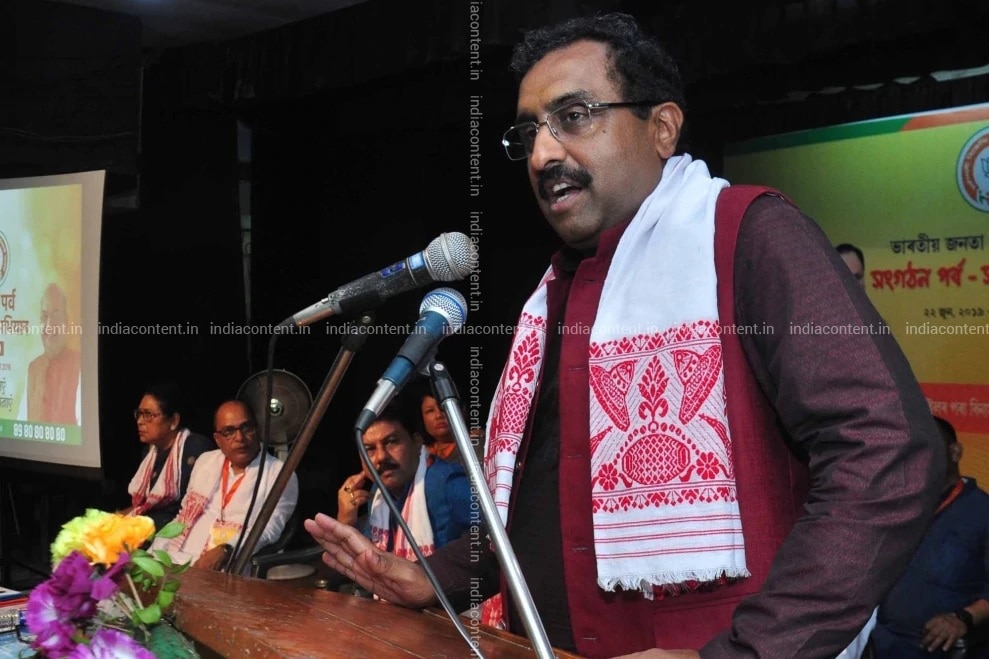 Ram Madhav was born on 22 August 1964 into a Brahmin family in Amalapuram in East Godavari district of Andhra Pradesh to Janaki Devi and Surya Narayan who both were Jan Sangh workers with strong RSS links. He was named ‘Ram Madhav’ as a portmanteau of the first RSS Sarsangchalak, Keshav Baliram Hedgewar and second RSS Sarsangchalak Madhav Sadashiv Golwalkar. He earned a Diploma in Electrical Engineering from Andhra Pradesh and a post-graduate degree in Political Science from the University of Mysore in Karnataka.

Ram Madhav was associated with Rashtriya Swayamsevak Sangh since his teenage. He became a full-time volunteer for RSS in 1981 and also held several key positions in the organization. He served as the editor in charge of Bharatiya Pragna, the monthly English journal published by the Nationalist thinkers’ forum Pragna Bharati. He also served as the associate editor of the Telugu weekly Jagriti. He worked with RSS as a journalist of its sponsored publications for over 20 years. He also wrote for various publications, including, The Indian Express and Open Magazine.

He served as the National Spokesperson (Baudhik Pramukh) of the Rashtriya Swayamsevak Sangh (RSS) in Andhra Pradesh. He emerged as a youthful and energetic TV spokesperson of RSS because of his ever-smiling visage and reasonable English speaking skills. He became a member of the Bharatiya Janata Party in July 2014 and was made the general secretary of the party in August. He played a key element in various schemes introduced by PM Modi.

He has strong views on Islamic terror in Burma and Sri Lanka and in a 2014 book, he suggested that India and China shall “remain fierce competitors.” He is the key networker who got the NRI crowds at Modi’s rockstar appearances in NY and Sydney.

Madhav’s experience with the think-tanks gave him his present flair and acceptance. He has visited the US several times and contributed to building a base among Indian Americans and lobby among US lawmakers. He has made three trips prior to the Prime Minister Narendra Modi’s US launch to organise the grand reception and frenzied crowd. Following the overwhelming response for the US trip, Madhav was assigned to plan and organise Modi’s public addressing at Madison Square in Sydney, Australia.

Madhav is one of the most well-known representatives of the party in northeast India. He played a significant role in the party’s victory in Nagaland and Tripura. He was a part of the party’s strategy to convince Congress strongman Himanta Biswa Sarma to join BJP. Sarma was credited for the party’s victory in Assam. He played an important role in Modi’s meeting with Israel prime minister Benjamin Netanyahu in the US for the foreign policy. He was also a part of BJP’s Kashmir experiment which resulted in the party forming a government in alliance with Jammu and Kashmir Peoples Democratic Party (PDP).

Ram Madhav is a bachelor, a teetotaler and a vegetarian. His personal life has been subjected to discussion in the RSS circles. Some of his rivals in the party reported that Madhav was seen sipping champagne at a restaurant however, a BJP leader responded that he was drinking water. His loyalty to Modi and Amit Shah has helped him maintain his stature against the smear campaign against him. Madhav has addressed various prestigious forums like the Shangri-La Dialogue in Singapore, World Peace Conference at the Mahachulalongkorn Rajavidyalaya (University) of Thailand, Halifax Security Forum in Canada, 2nd Sochi Eurasian Integration Forum in Russia, and the BRICS Political Forum in China. Recently at a conference on ‘Indian Democracy at Work – Money Power in Politics’ at the Indian School of Business, Madhav regarded that the control of the state should not be enormous and omnipresent. He added that the biggest challenge of the Indian economy was not China, but the country’s economic system and regulations.

Madhav is the author of several books including Uneasy Neighbours: India and China after Fifty Years of the War published by Har-Anand Publications in 2014, Asahaj Padosi published by Prabhat Prakashan on January 1, 2015, Hydrabad Hatyalu-Nijam Cheppaleni Netalu published by Nabu Press on August 19, 2011.

The India Content website has a good stock of Ram Madhav images. The high-definition images on the website are available in three sizes – small, medium and large.