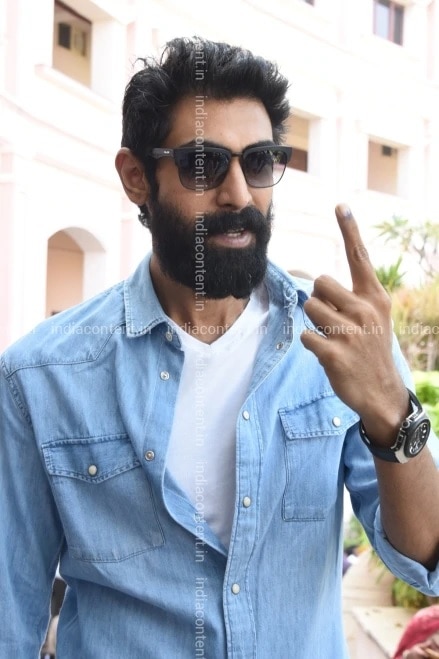 Rana Daggubati turns 35 on December 14 and social media is flooded with the actor’s photos, videos and wishes from the film fraternity, friends and fans.

On his birthday, the makers of Virataparvam released the first-look poster to make Daggubati’s day more special. Rana took to Twitter to share the poster of the film and wrote, “And here is the first glimpse of my next #Virataparvam !! #RevolutionisanactofLove with @SLVCinemasOffl @SureshProdns @venuudugulafilm @Sai_Pallavi92

The Bahubali actor was overwhelmed with the wishes coming his way and also took to social media to thank everyone. He wrote, “Wow thank you for the birthday wishes…. this will be a good one with you guys on my side ;)”

The Bahubali actor made his acting debut with Telugu Blockbuster ‘Leader’, for which he won the Filmfare Award for Best Male Debut—South. He made his Bollywood debut with film ‘Dum Maro Dum’ in which he starred opposite Bipasha Basu. He also played a supporting role in film ‘Baby’ which received critical acclaim and became a huge commercial success.

Rana Daggubati has also worked in many Telugu films such as ‘Rudramadevi’, ‘The Ghazi Attack’ and ‘Nene Raju Nene Mantri’.

The actor is also an established television personality and has hosted several award shows like the 2nd IIFA Utsavam, the 2nd South Indian International Movie Awards and his celebrity talk show, ‘No. 1 Yaari’, which brought many celebrities on the sets such as Nani, Kajal Aggarwal, Tamannaah, Navdeep, Nikhil Siddharth, Naga Chaitanya and many more.

Besides, the actor has invested in businesses ranging from a business accelerator programme for technology startups to an entertainment agency and a comic book company.

Rana Daggubati was born in Chennai, Tamil Nadu to Telugu film producer Daggubatti Suresh Babu and is part of the Daggubatti-Akkineni clan. His paternal grandfather D. Ramanaidu was also a Tollywood film producer.

Rana Daggubatti has acted in several films. Below are some of his top hits the actor has worked in:-

The India Content website has a good stock of Rana Daggubati images from various promotional events, shoots, award functions and more. The pictures are of high- quality and available in three sizes – small, medium and large.