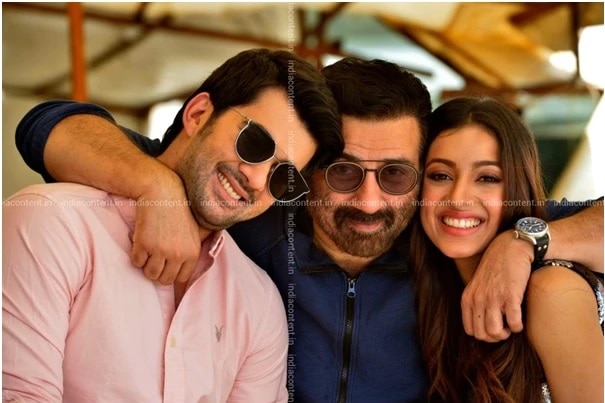 Ever since the trailer of the film Pal Pal Dil Ke Paas has been released, the film has been garnering a buzz and for good reason. This film marks Sunny Deol‘s son Karan Deol‘s debut into Bollywood. A lot of expectations have been raked up for this film as all eyes are on the newbie. Karan will be seen opposite the beautiful Sahher Bambba, who is also making her big Bollywood debut with this film. This will be Sunny Deol’s third directorial after Dillagi and Ghayal Once Again. Sunny hopes that the audience appreciates Karan and showers him with the same kind of love that they have given him.

The trailer for Pal Pal Dil Ke Paas opened to some positive reception, and as far as we can tell, this movie seems like a typical love story where the lead characters go on a trip at various picturesque locations. Karan plays the role of Sahher’s travel guide. During their adventures together, they fall in love with each other. However, after their trip, things begin to fall apart for this couple. What remains to be seen is will they have their happily ever after or not. The film seems to have all the typical tropes of a love story – pretty locations, romantic songs, goons to be bashed up.

You can find images of Pal Pal Dil Ke Paas Promotion on https://www.indiacontent.in/search-topic/pal-pal-dil-ke-paas

The film’s official teaser and the title song have been received really well by cinephiles. The music of the film Pal Pal Dil Ke Paas is composed by Sachet-Parampara and Tanishk Bagchi. The entire album has been penned by writer-poet-lyricist duo Siddharth-Garima and the talented pair has once more shown their mettle. The first song, Aadha Bhi Zyaada is like a breath of fresh air and singer Hansraj Raghuwanshi completely owns it with Karan Deol’s rap.

The title track Pal Pal Dil Ke Paas has already gained popularity with the listeners. The composition is melodious and has a comfortingly familiar feeling. Singers Arijit Singh and Parampara Thakur have done a good job on it. This song is definitely one of the USPs of the film- Pal Pal Dil Ke Paas. Another song- Ishaq Chaliya is a Punjabi EDM track by the composers who gave a youthful dance number.

Karan Deol’s and Sahher Bambba’s debut film- Pal Pal Dil Ke Paas gets released on 20th September 2019. The film received mixed responses from the film critics and audiences. The movie has the scenic beauty of the Himalayas to blackmails and family melodrama. It is made with every element required for a hit romantic film. The story unfolds with Karan Deol who plays the role of Karan Sehgal, lives in Manali and owns Camp Ujhi Dhaar, which organises adventure treks. The protagonist had a sad childhood as he lost both his parents to an avalanche. Saher Bammba, on the other hand, plays Saher Sethi, a sharp and gorgeous video blogger from New Delhi who comes to Camp Ujhi Dhaar with a motive to expose what she thinks is a scam.

She is on a break in her relationship with boyfriend Viren Nagar, played by Aakash Ahuja- a spoilt brat and son of an influential lawyer and three-time MP Ratna Nagar, played by Meghna Malik. Karan takes Saher on this ‘trip’ and is dropped off to the starting point of the trek. Like every love story, the boy and girl initially fight over trivial issues to eventually fall head over heels in love with each other. And then enter disgruntled ex-boyfriend who starts creating troubles for the couple. The second half of the film shows if their love story can fight all odds and win.

Critics found Karan Deol as a cute face in the film Pal Pal Dil Ke Paas who carries the same expression throughout the film. Saher Bammba, on the other hand, is a pleasant surprise who creates magic with her portrayal of a typical Delhi vlogger- chirpy, beautiful and family-loving. While others described Pal Pal Dil Ke Paas an innocent film where Karan Deol and Sahher Bambba make their debut in an old-world romance that is captivating and surprisingly refreshing. It’s predictable but believable.