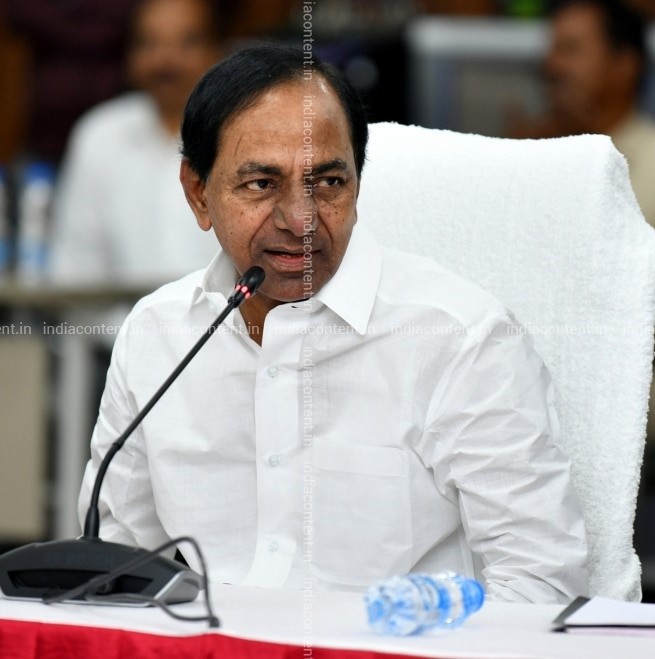 A prominent Indian politician and social activist Kalvakuntla Chandrashekar Rao was born on 17th February 1954 at Chintamadaka, Medak, Andhra Pradesh and turned 66 this year. His father’s name is Kalvakuntla Raghava Rao and his mother’s name is Venkatamma. He has one elder brother and nine sisters. He did his masters in Literature from Osmania University, Hyderabad. His leisure interest comprises reading, writing, poetry and listening to music. Benson and Hedges is his favourite cigarette brand.

KCR tied the knot with K. Shobha on April 23, 1969, and the couple is blessed with two children – one son named K.T.Rama Rao and one daughter named Kalvakuntla Kavitha. Both of them are politicians. K. T. Ramarao is the parliamentarian from previous Karimnagar district Telangana and is the cabinet minister of IT, Municipal Administration and Urban Development Departments. His daughter is an Ex-MP from Nizamabad, Telangana. His nephew Harish Rao is serving as MLA for the Siddipet assembly seat and is the cabinet minister for finance in the Telangana government. KCR is well-versed with the four languages including Telugu, English, Urdu and Hindi and resides at official chief minister residence, Pragathi Bhavan in Hyderabad city.

He is the president of the Telangana Rashtriya Samithi, a regional party in India which was founded by him. He is the first Chief Minister of Telangana and came into power when the new state was created by the division of Andhra Pradesh in 2014. Currently, he is an MLA from the Gajwal constituency of Siddipet District. Before division, he acted as the MLA of Andhra Pradesh from Siddipet and MP from Mahbubnagar, Karimnagar and Medak.

After completing his studies, K Chandrashekar Rao started his career in politics by associating with the youth Congress party in Medak under the leadership of Sanjay Gandhi in 1970. In 1983, he united with Telugu Desam Party founded by N.T. Rama Rao and was fielded against A. Madan Mohan but could not take his seat. From 1985 to 1999, he triumphed four consecutive Assembly elections from Siddipet. He served as Minister of Drought & Relief for one year in 1987 under N.T.Rama Rao’s cabinet. He was designated as TDP convener for Medak, Nizamabad and Adilabad districts in 1990. In Chandrababu Naidu’s cabinet in 1996, he worked as Transport Minister. From 2000-2001, KCR joined as the Deputy Speaker of the Andhra Pradesh Assembly.

On 27th April 2001, KCR relinquished from the post of Deputy Speaker and Telugu Desam Party as well due to the arisen need of the creation of separate state as Telangana mass was being discriminated.

In 2004, he triumphed the Karimnagar Lok Sabha Assembly Seat and the Siddipet State Assembly Seat as a TRS candidate in elections. In the same year, his party contended for General Elections in association with the Congress party and was jubilant. As Congress party guaranteed a new state Telangana, TRS party’s four members gave up their seat from Lower House in 2006. Congress did not keep up to their promise.

When Y.S.Reddy, the CM of Andhra Pradesh took his last breath in 2014, KCR instigated the demonstration by keeping fast till death on November 29, 2009. The Indian Government announced the creation of a new state after his eleven days of austerity. He played a significant role in settling an individual state.

KCR sworn-in as the first Chief Minister of Telangana on 2nd June 2014. Being an apprehensive leader, KCR administered the oath of CM at 12:57 PM according to his priest. His lucky number is 6.

TRS elected him as the President for 8 times. In June 2019, the irrigation project Kaleshwaram has been commenced by Rao to irrigate 1 crore acres land with a capital disbursement of Rs. 85,000 crore.

KCR had also kicked off a Mission Kakatiya for the reinvigoration and restoration of 46,000 tanks and lakes in 2014.

Amma ODI and KCR Kit Scheme were introduced in 2017 which was the fruitful endeavour for lactating and pregnant women.

When KCR renounced the CM post and demolished the TRS government in the state on 6th September 2018, President Rule was executed.

KCR is also a social activist who tries for the exhilaration of exploited and underprivileged people. He has taken an initiative for the massive tree plantation scheme of worth one crore rupees undertaken in Karimnagar in 2004. He also formulated new houses for Muslim minorities and arranged drinking water to 145 flood-affected victims in Siddipet constituency.

Rao loves to play badminton in his leisure time. He performs all of his activities according to Vaastu, Astrology and Numerology. He always does the brainstorming with experts before fixing time for initiation.

The India Content website has a huge stock of high-definition images related to CM K Chandrashekar Rao. The images are available in three sizes – small, medium and large.