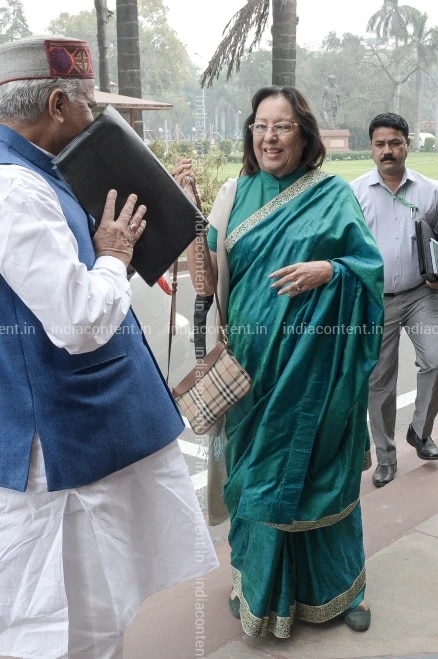 The renowned Indian politician, Najma Akbar Ali Heptulla celebrated her 80th birthday this year on April 13. Najma currently serves as the Governor of Manipur and the Chancellor of Jamia Millia Islamia. She was the former vice-president of the Bharatiya Janata Party (BJP) and a six-time member of the Rajya Sabha, from Maharashtra during 1980-2004 from Rajasthan during 2004-2010 and from Madhya Pradesh during 2012-2016. She served as the Deputy Chairman of the Rajya Sabha for sixteen years during 1985-1986 and 1988-2004. She was nominated by the BJP for the Rajya Sabha in 2012 from Madhya Pradesh and assumed her office on 24 April 2012. She served as the Minister of Minority Affairs of the Government of India from 2014 to 2016.

Najma attended Motilal Vigyan Mahavidyalaya School in Bhopal and pursued M.Sc. in Zoology in 1960 and PhD in Cardiac Anatomy from Vikram University, Ujjain. She served her career as a politician, government official, social advocate, and writer, who held important positions in the Indian National Congress (Congress Party) and the Bharatiya Janata Party (BJP).

In 1980, Najma joined Gandhi’s faction of the Congress Party after getting inspired by Indira Gandhi. She won a seat in the Rajya Sabha from Maharashtra state and was re-elected to that chamber for five terms between 1986 and 2012. Najma was elected as the deputy chairman of the Rajya Sabha for a one-year term in January 1985. She served as general secretary of the Congress party during 1986–1987 and as the spokesperson of the party for two terms during 1986–1987 and in 1998. She was re-elected as the deputy chairman of the Rajya Sabha to serve from 1988 to 2004. She served as a member of the Executive Committee of the Inter-Parliamentary Union, an international organisation of national legislative bodies from 1995 to 1999 and served as its president from 1999 to 2002. She was also appointed as a special envoy of the Indian prime minister on visits to foreign countries, notably in the Middle East.

Najma was inclined to the BJP during its leadership of the National Democratic Alliance (NDA) coalition government during 1999–2004. In 2000, she was appointed by NDA as the head of the Indian Council for Cultural Relations (ICCR). In June 2004, she officially resigned from Congress and joined the BJP, and won a seat in the Rajya Sabha from Rajasthan state. She eventually rose in leadership in the BJP leadership by becoming the party’s candidate for Vice President of India in 2007, though she lost the election to the UPA nominee, Hamid Ansari. In 2010, she became one of the 13 BJP vice presidents under Nitin Gadkari. Her tenure in the Rajya Sabha ended in 2010, and in 2012 she was elected to the Rajya Sabha from Madhya Pradesh. She was removed from the party’s vice president in March 2012 and was appointed as a member of its national executive. Following the party’s victory in the 2014 Lok Sabha elections, Najma was appointed as the Minister of Minority Affairs in the cabinet of Prime Minister Narendra Modi which she served till 2016. In August 2016, she was appointed as the 16th governor of Manipur. In May 2017, she was appointed as the 11th Chancellor of Jamia Millia Islamia University.

Najma established herself as the face of women’s empowerment in Indian politics. She was the president of the Conference of Women Parliamentarians of the Commonwealth Parliamentary Association held at New Delhi in 1992. She held an important role in the Fourth World Conference on Women held at Beijing in 1995. In 1997, she headed the Indian delegation to the United Nations Commission on the Status of Women. She was also invited to the International Women’s Leadership Conference at Harvard University, Cambridge, Massachusetts in 1997.

In 1966, Najma married Akbar Ali Akhtar Heptulla, a manpower consultant. They have three daughters. Her husband Akbar Ali Akhtar Heptulla was instrumental in establishing the Patriot newspaper in the 1960s. He died on 4 September 2007, in New Delhi at the age of 75. Najma was the grandniece of the renowned Islamic scholar and Indian independence activist Maulana Abul Kalam Azad.

Najma’s favourite politician is Atal Bihari Vajpayee. Her favourite actors are Dilip Kumar and Shammi Kapoor and her favourite films are Shaheed (1948), Mughal-E-Azam (1960) in Bollywood and Mackenna’s Gold in Hollywood.

The India Content website has a good stock of Najma Heptulla images. The high-definition images on the website are available in three sizes – small, medium and large.