Around 25 crore workers took part in the nationwide protest called by the Centre of Indian Trade Unions (CITU) against anti-labour policies of the Modi- government.

The joint statement by 10 trade unions across India had claimed on January 8 that about 25 crore people would take part in the strike against alleged anti-working class policies of the Central government. Banking, transport and other services across the country were affected by the strike.

The declaration for this strike was adopted in September 2019 by unions like HMS, CITU, INTUC, AITUC, SEWA, AIUTUC, TUCC, and UTUC among various independent federations.

The trade unions had demanded a reversal of anti-working class, anti-people and the anti-national policies allegedly implemented by the Modi-government. The unions in the joint statement had also accused the labour ministry of doing little for the workers and condemned the violence on JNU campus and similar incidents in university campuses across the country.

Besides, farmers across the country also extended support the strike, as according to them, the Modi-government failed to address rural distress issues.

Five states, including Odisha, Kerala, and Assam, witnessed complete shutdown on account of trade unions strike across India against the central government, while a few incidents of violence were reported in West Bengal and Rajasthan. Rail and road blockades were reported from many parts of West Bengal. A police vehicle was targeted in Jadavpur and CPM MLA Sujan Chakraborty was detained in Bengal. A brawl was reported between the workers of CPM and Trinamool Congress workers. According to CITU, the centre’s policies and labour laws had affected 80 crore people. Several Left supporters in Bengal also held a ‘Rail Roko protest’ to support the strike call by traders. According to railway police, crude oil bombs were found on tracks. Violence was reported in Jadavpur and Behala. A bus was also damaged in Cooch Behar during the trade unions strike against the government.

In some parts of north Bengal, the Trinamool Congress took out rallies against the strike and urged people to maintain normalcy

The strike by various traders was supported by the Uddhav Thackeray government in Maharashtra.

In Chennai, the ruling AIADMK did not support the protest. Several protesters were detained when they tried to block roads. The government authorities denied leaves to employees who took part in the strike. Many factories in Coimbatore and Tirupur were also affected by the trade unions strike.

In Andhra Pradesh, police arrested some Left party and trade union leaders as they tried to stop state-owned buses and blocked roads during the strike. Besides, protesters were arrested in Ongole, Vijayawada, Visakhapatnam, Kadapa, Guntur and other towns when they tried to stop buses of Road Transport Corporation (RTC) from coming out of the depots.

Puducherry was on a complete shut down due to the trade unions strike. No trucks, buses, autos or tempos were seen on the roads. Shops, restaurants, and theatres remained shut during the protest.

Earlier, Labour Minister Santosh Gangwar held a meeting with trade union leaders before the protest but failed to convince the traders to call off the strike. The traders were disappointed as no meeting with the Ministry of Labour and Unemployment had been held since 2015.

Several states remained unaffected due to the strike including Delhi, though most industrial workers stayed away from work. Metro and the Delhi Transport Corporation (DTC) services functioned normally despite the strike call. According to the officials, no trains were affected in the national capital, but some Delhi-bound trains from Odisha and West Bengal did get affected.

The India Content website has a good stock of images related to the nationwide Trade Unions Strike. The high-quality images on the website are available in three sizes – small, medium and large. 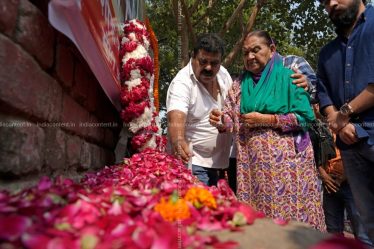