Durga Visarjan – A procession to Heaven! It is the last day of Durga Puja when the celebration sees ‘durga visarjan’. You can see lavish and grand processions taking idols of the goddess for immersion in the Ganga or sea. It is a day completely of mixed emotions for devotees bid farewell to the deity, hoping a hope of welcoming her next year.

As per the Hindu Panchang, Durga Puja is organized every year from the Shukla Paksha panchami of Ashivan month to the tenth day known as Vijayadashami. This time, Durga Utsav will be celebrated from October 6 to October 10,2019. Durga Puja during Navratri is mainly celebrated in Bengal. The grandeur of the pandals here is extremely famous in the country and abroad. Durga Utsav is celebrated with great pomp  and show in every part of the country except West Bengal. This Durga Puja is addressed by several names in different states of the country. The idol of Maa Durga is set in the grand pandal, which has a variety of programs for almost 5 days.

On Maha Dashami or Visarjan Day, a final Puja and at the same time the last Pushpanjali is offered to Devi Durga. It has been observed that all the 5 Gods and Goddesses have a kalash wrapped by a red cloth at their feet, which is tied from all the sides by a thread forming a square. This kalash is where the divinities are called and considered to be the prana of murti. The thread is tied in such a way that Devi does not leave us.

Durga Visarjan All You Need To Know:

Amid loud chants, hymns and drumbeats, idols of Gods and Goddesses are carried in huge processions to local rivers, where they are immersed. That custom is a symbol of departure of the deity to her home and to her husband, Lord Shiva, in the Himalayas.

when devotees embark on a procession carrying the worshipped mud sculpture-idols to a river, or other water bodies, and finally immerse them, symbolic of her return to the divine cosmos and to her marital home with Lord Shiva in Kailash.Regional and community variations in celebration of the festival and rituals are actually observed.

It is believed that the idea of submersion is ‘dissolution’ (the idols are usually made of clay) and so it reminds us of impermanence. Everything in the universe that comprises of name (nama) and form (rupa) is directly subject to dissolution – the forms and images of the gods even. In this way everything returns to the ocean of undifferentiated causality to eventually rise again in an unending cycle of evolution and involution. Women offered variety of sweets and prayers to the goddess, while the youth danced merrily to the rhythmic beats of dhak. People were seen merrily exchanging greetings and hugging each other.

And,amid tight security cover, puja organizers could be seen flocking the river Ganges ghats in the city, which used to be decked up for the occasion.

Similar scenes can be witnessed in Bangladesh on the other side of Ichamati river.

According to the Kolkata Police sources, adequate arrangements are made every year  for safe and peaceful celebrations on the occasion of Vijaya Dashami, including the installation of CCTV cameras at all the ghats.

Besides the police men,  personnel from the state civil defence, various civic bodies and Kolkata Port Trust (KoPT) have also been deployed to monitor the situationcarefully.

More than thousand of Durga idols are likely to be immersed at various ghats of the Ganges.

Heavy cranes fixed atop boats can be seen in action at some of the ghats to help lift and extricate the remains of the idols from the river to avoid pollution. Likewise, nearly 100 big-ticket community pujas used to participate in a colourful immersion procession in the city.

As Durga Puja is a very important festival of Hinduism, so is the Durga Visarjan. It has religious, spiritual, cultural and worldly importance. People start to worship Durga with the sixth day of the festival and end on Dashami. These days all temples are decorated and they look completely devotional. Some people worship the nine form of Durga with all the arrangements in their homes and keep fast. In the form of Durga Puja and through visarjan we worship female power.

In many places fair and market is organized on this festival. There are many stories related to Durga Puja and Visarjan. It is believed that Goddess Durga killed the demon bufallo named Mahishasura and after killing the demon buffalo goddess go back to her in-laws. It is also said that Mahishasur became very powerful after getting the blessing of Lord Brahma. Bramha Ji gave Mahishasura the boon that no god or demon can conquer him or degfeat him ever. After receiving the boon, he started harassing the gods in heaven and terrorized the planet earth. He made a sudden attack in heaven and defeated Indra and captured heaven completely. Trinity Brahma ji, upset by all the gods Visited Lord Vishnu and Mahesh for help.

All the gods fought together to defeat Mahishasur, On finding no remedy to the problem, the Gods from their own power created Goddess Durga for his destruction, who is also known as Goddess Shakti and Parvati. Goddess Durga kept on attacking Mahishasura for nine days and killed him on the tenth day. Since then, Hindus celebrate the festival of Durga Puja and later visarjan with pomp and show.

This tenth day is known as Vijayadashami. Durga Puja is actually celebrated with a desire to gain power so that evil power can be eliminated completely. People believe that Durga Mata will keep them away from all problems and negative energy. And that is why every festival of Hinduism has a social reason behind it. Durga Puja or Visarjan is a festival that plays an important role in infusing enthusiasm and energy in our lives.

If you are looking for Durga Visarjan pics then you must check the India Content website. You will find some good images on the website. The pictures are available in three sizes—small, medium and large. 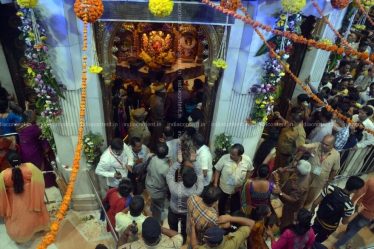