India and Bangladesh will play their first pink ball day-night Test on November 22 at Eden Gardens in Kolkata. The city of joy is brimming with everything that’s pink — light, decoration etc., to mark the historic day for both the teams as they play a Test match under lights with a pink ball.

The Board of Control for Cricket in India (BCCI) gave a sneak peak of the preparations that have been made for the Test match to be played in Kolkata.

To make the game more special, Army paratroopers will fly into the Eden Gardens to hand over a pink ball each to the two captains just before the toss.

The India Bangladesh Test will also see the SG pink ball making its debut. Until now, Test matches were being played with the Kookaburra and Dukes balls. In India, the SG Test ball is used to play Test cricket. For this match, BCCI asked its supplier of Test match balls, Sanspareil Greenlands (SG), a Meerut-based sports manufacturer, to deliver 72 pink balls. It will also be the first time the SG pink ball is used in competitive cricket.

Dukes, Kookaburra and SG are the three main manufacturers of cricket balls for international matches. While India uses the SG ball, England, Ireland and the West Indies use Dukes which is manufactured in England. The remaining Test playing countries make use of the Kookaburra ball from Australia.

Test matches with usual morning to evening schedule are played with a red ball. However, as we all know, the day/night tests are played under floodlights which make the ball less visible. The red ball loses shine and colour as the game progresses and appears brown in the end, making it difficult for the batsmen to spot it under artificial lights.

Earlier, there were experiments with orange, yellow, orange and pink balls, and there was even a suggestion to play with an improved white ball that could last 80 overs with the players wearing coloured kits.

Unlike the traditional start time of 9:30 am for Test matches in India, the pink ball match will start at 1 pm IST and end by 8:00 pm.

The pink balls have better visibility and do not lose their colour and shape easily, thus, they are preferred for Test cricket under lights. Besides, the pink ball is said to swing a bit more.

The pink ball can be a saviour for the bowlers, from whom the match is drifting to the batsmen for a long time.

The pink balls can survive a greater level of wear and tear than the usual white coloured ball.

Spotting the pink ball during transitions hours could be difficult.

The pink ball could be affected by dew on the field which is a problem in the night time.

The pink ball is a saviour for the bowlers, from whom the game drifs to the batsmen for a long time.

The pink ball could be a problem for a batsman as this ball swings and drifts a lot more than the white ball.

India Content has a good stock of high-quality images of matches that have been played with pink ball. The pictures of cricketers holding the pink ball are available in three sizes—small, medium and large. 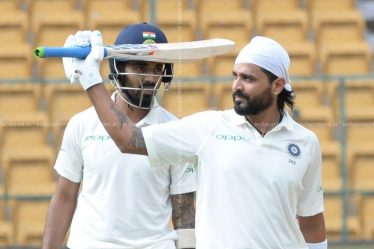