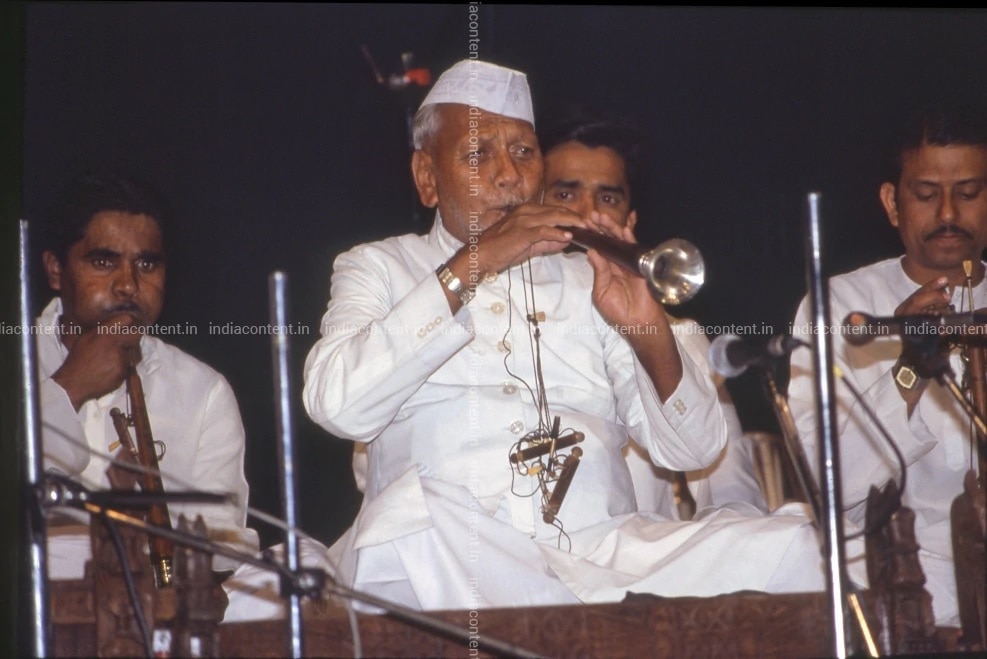 A big salute to the Shehnai maestro and top-four civilian awards recipient of India Bismillah Khan on his 104th birthday!

Indian musician and Shehnai Maestro Bismillah Khan was remembered on his 104th birth anniversary this year. Hailing from the family of Muslim musicians, Ustad Bismillah Khan was born in the house of Paigambar Bux Khan and Mitthan as Qamaruddin in Bhirung Raut Ki Galim, Dumraon, Bihar on 21st March 1916. He had one elder brother named Shamsuddin. Like his grandfather, Rasool Baksh Khan used to take care of him as a newborn, and named him Bismillah. His ancestors were acclimatised to act as court musicians in the Naqqar Khana at the princely states of Bhojpur (presently known as Bihar). His father regularly staged shehnai at the Maharaja Keshav Prasad Singh court of the Dumraon Estate, Bihar.

When he was six years old, he shifted to Varanasi in the state of Uttar Pradesh and waded through his maternal uncle named Ali Bux ‘Vilayatu’ Khan a renowned shehnai player of Kashi Vishwanath Temple. Later at the age of 14, he also performed with his uncle to the Allahabad music conference.

Bismillah contributed in the Indian music scene and garnered the title of ‘Ustad’. The devotion for his art of playing this Shehnai single-handedly made it a popular musical instrument. He was the only gem who brought this wonderful musical instrument named ‘the Clarinet’ into the mainstream Indian classical music.

Bismillah belonged to a Shia Muslim family where music is outlawed but he instigated his passion by praying Saraswati, the Hindu goddess of wisdom and arts to adapt seven swaras as his namaaz.

He was drowned in his passion of playing Shehnai. Had he not been playing the popular musical instrument Shehnai, it would have been superfluous in the new era of independent India.

Because of his deep bonding with Shehnai, he named it as ‘Begum’ after his wife’s death.

His superhit ragas encompass Bhimpalasi, Yaman, Malkauns, Sohni, Poorbi Dhun, Chaiti and Kajri. Some of his top tracks are Thumri Bhairavin, Kalavati, Vaishhnava Janato, Dadra, Raga Lalit, Raga Kamod and Todi. He made a splash among the music lovers with his numerous performances.

India is honoured to have such red-letter masterpiece in musical history. He rigorously practised the Shehnai on the banks of River Ganga and improvised his skills by inventing ragas which were beyond the range of shehnai.

When he performed in a concert at All India Music Conference in Calcutta in 1937, this instrument came into the spotlight and was appreciated by the music admirers. He received the rare honour of reciting Shehnai after the Prime Minister’s speech on the eve of India’s independence in 1947. Since then, he always performed on 15th August on Red Fort in Delhi. He was the only shehnai musicale who kept the heritage of classical music always alive. He spread the message of brotherhood with his music and proved that ‘Music has no caste and will survive even if the world withers’.

Ustad Bismillah Khan garnered various plaudits for his musical performances which encompass Bharat Ratna in 2001, Padma Vibhushan in 1980, Padma Bhushan in 1968, Padma Shri in 1961 and Sangeet Natak Akademi Award in 1956. He became a fellow of Sangeet Natak Akademi in 1994, earned Tahar Mausique from the Republic of Iran in 1992 and three medals in All India Music Conference, Calcutta in 1937. Madhya Pradesh Government also conferred him Tansen Award.

In 1932, Ustad Bismillah Khan exchanged nuptial vows with her cousin at the age of 16. The couple was blessed with a huge family including five sons and three daughters. He was very lucky to have many grandchildren and great-grandchildren. He was a foster parent of a daughter named Dr Soma Ghosh who is a well-known Hindustani shastriya sangeet exemplar.

He was a very simple person who never attempted to stack up wealth and led an easy life. He got a chance for permanent citizenship to get settled in the USA but he refused the offer due to his love for his motherland.

In his last days on 17th August 2006, Ustad Bismillah was taken to the hospital because of the decline in his health. Post four days on 21st August 2006, he succumbed due to cardiac arrest and was cremated at a national ceremony in Fatemann burial ground of old Varanasi, Uttar Pradesh under a neem tree with Shehnai and earned the national pride of 21-gun salute from the Indian Army.

He was not able to accomplish his last wish of performing at India Gate.

The India Content Website has a good stock of high-quality images related to Bismillah Khan. The images are available in three sizes – small, medium and large.