An Indian film thespian and playback singer, Nithya Menen turned 32 this year. She is a well-known face of South Indian cinema who is loved for her numerous unforgettable performances.

Hailing from a Malayali family, Nithya was born on 8th April 1988 in Banashankari, Bangalore, Karnataka. Her mother belongs to Palakkad and her father is from Calicut. She is the only daughter of her parents. As her goal was to become a journalist, she acquired a bachelor’s degree in Journalism from Manipal Institute of Communication, Manipal, Karnataka. But she realised that the field of Journalism did not interest her, so she turned to filmmaking and joined a cinematography course at the Film and Television Institute of India in Pune, Maharashtra. During her entrance examination, she happened to meet Nandini Reddy who encouraged her to pursue her career in acting instead of direction. Then, she considered it as the best stage to exhibit one’s feelings and ideas.

Nithya has a predominant presence in Kollywood. She is a South Indian polyglot.

Nithya gave her appearance in various language films including Hindi, Malayalam, Telugu, Kannada and Tamil. She made her debut appearance on the silver screen as a child artist at the age of eight. She was portrayed as the younger sister to Tabu’s character in the Indian English language movie, ‘The Monkey Who Knew Too Much’ in 1998.

In 2006, Nithya gave her adult debut appearance with the Kannada movie ‘Seven O Clock’. She played the character of Anu in this movie. While she was pursuing the last year of her schooling, she was offered the lead role in a Malayalam movie Aakasha Gopuram alongside Mohanlal. Although the movie was a big failure from the financial end, the filmi critics commended Nithya’s debut Malayalam performance and found sparkle in her entry. Next, she appeared in the Kannada superhit film Josh in a supporting role and also earned a nomination in the Best Supporting Actress category.

In 2011, she stepped forward with her debut Telugu onscreen appearance in Nandini Reddy’s romantic comedy Ala Modalaindi. The critics mentioned her as a charming find and Nandini Reddy titled her as ‘the discovery of the decade’. After this movie, she appeared in Santosh Sivan’s historical fiction Urumi and starred as a Chirakkal princess named Bala enacted the lover of Prabhu Deva’s character. She garnered positive reviews by Sify. Later, Nithya disclosed that Sivan had written this role only for her.

In 2012, she appeared in the Telugu romantic movie Ishq with Nitin Reddy, Karamyogi – a Malayalam adaptation of Shakespeare’s Hamlet, Thalsamayam Oru Penkutty in which she appeared as a villager whose regular life was aired as a reality show for a month and Ustad Hotel.

In 2013, she portrayed in three Telugu movies Okkadine, Jabardasth and Gunde Jaari Gallanthayyinde and one Kannada movie named Mynaa. She also appeared in a cameo role in the Trivikram directorial S/O Satyamurthy. Later in 2015, she made her appearance in two films 100 Days of Love, a romantic Malayalam film and Ok Kanmani, a bilingual film. In 2016, she appeared in two Tamil, two Telugu and one bilingual – Kannada/Tamil movies.

She gave the only blockbuster Tamil movie named Mersal in 2017. In 2018, under the Nani’s production, an anthology psychological thriller film ‘Awe’ did a wonderful job. She performed the role of one of the couple opposite Eesha Rebba who attempts to get the consent of their lesbian relationship from the latter’s parents. Post-2015’s romantic flick 100 Days of Love, she marked her comeback to Malayalam industry with VK Prakash’s Praana in 2019.

In 2019, she made her first appearance in Hindi cinema with the movie Mission Mangal. She played the character of Varsha Pillai alongside Akshay Kumar. Presently, she is working in the Hindi web series named Breathe Season 2.

This popular South Indian actress has bagged eleven awards and has been nominated 18 times till date. Nandi Awards bestowed her Best Actress award for the movie Ala Modalaindi in 2011 and Special Jury Award for the movie Malli Malli Idi Rani Roju in 2015. In 2011, she conquered Hyderabad Times Film Awards for Promising Newcomer Female and Ugadi Puraskar Awards for Best Actress for her movie Ala Modalaindi. She has also been honoured by CineMAA Awards, Filmfare Awards South, Vanitha Film Awards, 2nd and 5th South Indian International Movie Awards and 65th Filmfare Awards South for giving ravishing performances in her career.

Nithya Menen is still single and has not found her soulmate as yet. Her best actor is Mohanlal and the actress is Shobana. She loves singing in her free time. Her favorite movies are Titanic (1997), The Matrix (1999) and Spider-Man (2002). John Grisham tops the list of her favourite writer. Her most-cherished singer is Shreya Ghoshal and the music director is A.R.Rehman. She also plays cricket whenever she gets time. Besides, she enjoys eating South Indian cuisine a lot.

The India Content Website has a good stock of high-quality images related to Nithya Menen. The images are obtainable in three sizes – small, medium and large. 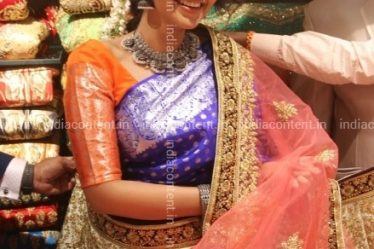